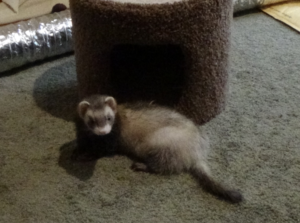 In one of my best-read posts, I told the tale of Harpo the Ferret’s tail. A tussle over his diagnosis illustrated how experts and nonexperts can learn from evidence. If you didn’t read it, this your spoiler alert. If you did, you can skip the next paragraph.

My ferret Harpo developed an odd bulb of skin at the end of his tail that did not seem to bother him. Two veterinarians over the course of a year dismissed it as benign, but the second found a lump in his torso that likely indicated lymphoma. Tests were inconclusive, and I was skeptical based on his lack of other symptoms. That night I noticed the bulb had bled after I accidentally stepped on it. So I deployed my research skills and found a journal article about the rare case of a ferret with a common type of butt tumor appearing instead at… the end of its tail. The next day I took Harpo back to the vet, and a heated discussion was required to get the vet to hear my evidence. She then did surgery to snip the thing off, and he recovered quickly.

The tail appears perfectly normal now, except short for a ferret. Now to my reason for this sequel: There were hints in the first post of an unexpected result, but I can now report with certainty this physical change has radically changed Harpo’s behavior. First I must confess I have the world’s most spoiled ferrets. My former home office is now the “ferret den” for Harpo and his brothers Groucho and Chico. (Fans of old movies will recognize these as three members of the fabulous comedy team the Marx Brothers; ferrets are the funniest animals I’ve been around.) When I’m home I also give them the run of the house’s common areas, which leads to my observations.

Ferrets sleep a lot. Chico naps just about anywhere when their den door is open, but he preferred a large box in my workout room or under the living room sofa. Groucho prefers their den, but can be found under the sofa or in their cat condo in the living room. Both sometimes sleep in the open. In contrast, formerly Harpo almost always went back to their den to nap, though sometimes curling up with Chico under the couch.

Starting almost immediately after the surgery, and now consistently, he has taken over Chico’s box. (Sometimes I will find Chico lying next to the box forlornly, even though I put another box in the space for him.) Harpo will also occasionally nap in the open now, or by me as I am typing in the living room.

Ferrets insist that favorite toys must be in one of a few specific places at all times, for some reason. A favorite game requires me to steal those, toss them—the toys, not the ferrets—around the other end of the house, and then crawl around blocking the recovery efforts like a soccer goalie!

Groucho and Chico share a few rubber balls, but Harpo has always been the greediest hoarder of toys. He took primary custody of a tiny rubber ducky, a smallest-size Kong, two thick plastic bags linens came in, and a copy of Durham magazine. Prior to the surgery, I could always find these in the ferret den, because Harpo took them there (here’s the video proof). After the surgery, the bags and magazine began to only make it only partway down the hall. Now all of his toys end up in the workout room, usually in the corner behind “his” box.

Finally, he spends much more time poking around the living room when I’m in there. Formerly he used the sofa as a “safe zone,” sticking a nose out as he observed the rest of us after short explorations or ferret play. He certainly spends far more time laying at my feet, often staring up at me from his back, trying to guilt me into playing with him instead of working (which works too often, I fear).

What changed? It seems clear Harpo is no longer afraid of having his tail stepped on. This despite the fact I had never stepped on it before the time mentioned above! I presume his brothers did on occasion, but again, never saw him react to pressure on it during horseplay, which he has always loved. His increased sense of safety has changed his personality, which by the scientific definitions includes patterns of behavior.

His behavior changes led me to think about psychological safety and the myths surrounding personality in business. Prior to the surgery, I think Harpo would have scored higher than both of his brothers on the Neuroticism scale, and lower on the Extraversion scale, on a Big Five personality test. (These are the only scientifically valid personality assessments, versus outdated models like Myers-Briggs and DiSC.) Contrary to one myth, the best evidence suggests human personality changes up to 25% on average over the course of a lifetime. Usually that is gradual, but we’ve all read cases of rapid change in humans. Today Harpo would score lower on Neuroticism than Groucho and higher on Extraversion than Chico.

Belying another myth, scientific evidence proves that situation and environment are bigger drivers of behavior than personality. Managers who get misled into paying for personality testing as teambuilding before they embrace evidence-based practices are wasting their budget money. Scientists even have a name for this too-common phenomenon, “fundamental attribution error” (FAE). In thinking Harpo acted skittish due to permanent personality traits, I was guilty of FAE. That behavior was shaped primarily by the situation of having a slow-growing tumor at the end of his tail.

This lesson applies to business not only as a warning about FAE, but also as an allegory to psychological safety. Over the years I’ve heard a series of statements from managers that were probably related to safety, among them:

In every case, I soon diagnosed that the organizational culture or the manager’s behavior was the root cause of the team’s behavior. People won’t complain to someone with social power over them unless the manager takes radical steps to create an environment of psychological safety. Merely being “a nice person” and reacting well to suggestions is not enough. You have to prove you will change your behavior in response to suggestions, or can argue without any retaliation—or even better, make most of those suggestions unnecessary, because you have empowered the team to make its own decisions.

Even if your team is an oasis of safety, if the larger organization emphasizes the social hierarchy, many on the team will still remain silent. As hinted in my previous post on the effects of social power on people, not having social power creates patterns of behavior. One of those patterns is unwillingness to speak up, especially in opposition to the powerful. The more you or your company emphasizes your power over other individuals, the more they are going to subconsciously fear your stepping on their tail, even if you never have. For example:

The more control your answers suggest you have over “your” employees, the less psychological safety they are going to feel, and the less openly they will share information with you. And, ipso facto, the less likely statements like those in the first list above are factually accurate.

Don’t take it from me: Harpo the Ferret’s behavior says it’s true. No one as cute as that could possibly lead you astray, even if his nickname now is “Stumpy.”